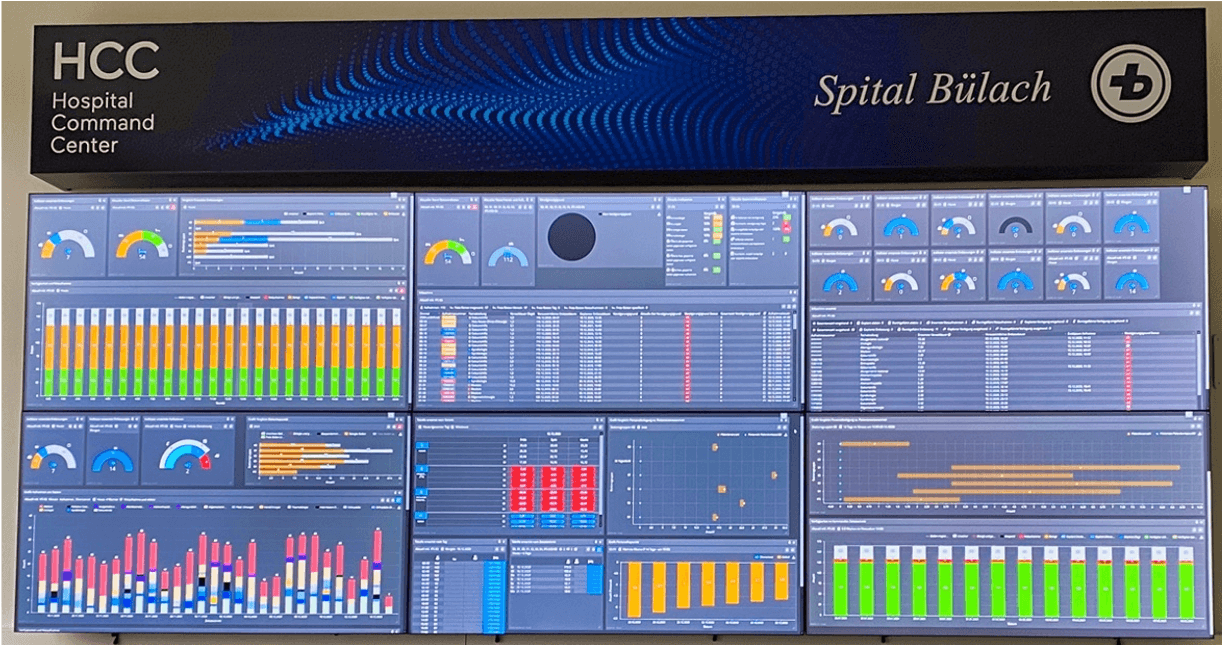 The word “capacities” is on everyone’s mind. Before Covid-19, the conversation was mainly about “overcapacity”. There were too many offers, for example too many beds, especially in Switzerland. And during Covid-19 it was argued that all capacities had to be used to cope with the pandemic. It has been shown that in some cases there were too few capacities available. Or that the existing capacities were not well coordinated with one another. After the pandemic, the targeted and optimal use of existing capacities will become even more important. The word comes from Latin (“capacitas”) and means storage volume. For a hospital, it means what its performance capacity is. This is not about the capacity of the individual clinics, the operating room or the emergency room. Rather, it is about the performance of the overall system, the interaction of the individual elements and units. An overall view is often missing. Optimisation takes place in one’s own area or in one’s own department. In our experience, this is the root cause of many problems in hospitals and clinics. In a broader sense, even for the entire health care system.

The daily frustration with beds and resources

It is nine o’clock on Wednesday morning. The ward managers of all departments meet for the daily meeting. Tanja Albert, the ward manager of ward A, reports: “We have to block beds today because a nurse is absent at short notice. We already knew that yesterday. However, we had expected that there would only be two inpatient admissions today. We would have managed that. But now there are five. In addition, not all patients can be discharged today as planned. It would be great if we could get someone from the staff pool as support for the late shift today. Then we’ll get it under control again by late afternoon.”

Katrin Wehmayer from the bed management team, however, doesn’t trust the situation. She can’t wait that long. She starts redistributing the admissions to the departments. She knows the drill. It is her daily routine. She makes several phone calls and clarifications. After reaching the doctor on duty after several attempts, she is able to solve the problem. Mrs Wehmayer and Mrs Albert are relieved. They have solved the problem once again. In the meantime, someone from the staff pool could also be organised for the late shift. However, the support would not be necessary any longer. To be on the safe side, the beds will remain closed.

One of these five patients – Reto Schwarz – is now inevitably on the medical ward E instead of the surgical ward. It is not everyday life for the medical department to take in elective procedures and bring them to the operating room. Department head Herbert Schneider is correspondingly annoyed. Once again one of these “strangers”. The ordered blood sample is nearly forgotten. This delays the process. Eventually, patient Schwarz arrives too late in the operating room. The OR coordinator Johann Marxer once again records in his dashboard that a patient was 15 minutes late. He has the next meeting of the OR commission in mind and calculates how much this delay will cost “him”. “Do the wards not realise that every minute in the operating room is expensive and every empty minute in the operating room is lost money? We had actually discussed this in detail at the last exchange.”

In the afternoon, surgeon Dr Mark Peter goes to “his” ward A for the usual post-operation visit. However, he does not find the patient Schwarz who has been operated on. He is in ward E. Annoyed, he makes his way there and calls Mrs Wehmayer from the bed management on the way. He complains about the “foreign patient” and wants Mr Schwarz to be transferred immediately to his usual ward A. He says that this is the only way to ensure the best possible treatment.

The emergency department is very busy today. There are more patients to care for than usually. In addition, fewer patients are leaving the departments than planned. Today’s planning did not work out. This means that Mr Schwarz is not the only ” stranger”. For ward A and Tanja Albert, this means that the beds that were originally blocked have to be reopened after all. However, the patients who are admitted are not those who were originally planned. They are mainly medical patients, also “strangers”. Tanja Albert already knows that she will request that these patients be transferred to the “right” ward at the meeting tomorrow.

At the end of the day, the staff in the departments who were not directly involved ask themselves: “Why doesn’t the bed management put the patients in the right department straight away?”

Addressing the underlying problems in hospitals

This is one of the basic patterns that most hospitals are familiar with. There are many more. One such example is the university hospital where there are always too few beds available in internal medicine on Monday morning. As a result, it has a ” discharge problem” in the emergency department. The emergency department knows this and regularly criticises internal medicine. They should finally improve discharge management on the weekends. Internal medicine replies that this is precisely what is not possible. One problem for example, is that the rehabilitation clinics often do not accept new patients at the weekend.

Another typical underlying problem is the utilisation of the intensive care unit (IPS). Regular operating room operations start on Monday with major interventions. By the middle of the week, the places for surgical patients on the IPS become scarce. Year in, year out, it’s the same game.

These basic patterns all exemplify the systemic stress of hospitals and clinics. We attribute this to the fact that the “supply” (=number of beds, operating rooms, number of staff, etc.) and “demand” (=patient needs and volume) are not aligned. This is no simple task. There are hardly more complex and (unfortunately) more complicated systems than hospitals. But it can be done. The “self-made”, systemic stress can be avoided.

In the picture: a typical bed occupancy curve of a hospital

More silence and better conditions for patients and employees

Examples in the USA and the Netherlands show: It is possible to address this underlying pattern and causes. The approach for this is capacity management, also known as ” Integrated Patient Flow”. The goal of Integrated Patient Flow is to optimise the system performance of medicine. It is about creating stability and tranquillity. This allows doctors, nurses and everyone else involved in treatment to concentrate on what matters: working with patients. Patients receive the right care, by the right people and at the right moment. The results achieved are impressive:

The digitalisation has also reached the health sector - and will shake it up. The…

The modern operating room – the key to success

Lean Operations Center: Security for planning and control during times of COVID-19 and beyond

Categories
Change Impact Innovation Inspiration Lean New Construction Strategy
Copyright walkerproject 2023 - All Rights Reserved
Back To Top
This website uses cookies to improve your experience. We'll assume you're ok with this, but you can opt-out if you wish.Accept Read More
Privacy & Cookies Policy

This website uses cookies to improve your experience while you navigate through the website. Out of these, the cookies that are categorized as necessary are stored on your browser as they are essential for the working of basic functionalities of the website. We also use third-party cookies that help us analyze and understand how you use this website. These cookies will be stored in your browser only with your consent. You also have the option to opt-out of these cookies. But opting out of some of these cookies may affect your browsing experience.
Necessary Always Enabled
Necessary cookies are absolutely essential for the website to function properly. This category only includes cookies that ensures basic functionalities and security features of the website. These cookies do not store any personal information.
Non-necessary
Any cookies that may not be particularly necessary for the website to function and is used specifically to collect user personal data via analytics, ads, other embedded contents are termed as non-necessary cookies. It is mandatory to procure user consent prior to running these cookies on your website.
SAVE & ACCEPT